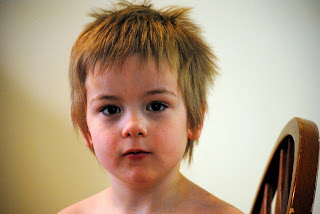 Isn't he so gorgeous? I am always snapping away, saying 'Anthony! Anthony!' and he largely ignores me and then sometimes, like in this picture, he looks right at me. I wonder, does he wonder why I am taking pictures and crying? What does he think of me? He probably thinks I'm a NUT, and he is probably RIGHT. But it's just such a gift, out of nowhere, when he looks right at me.
He is having a good weekend, even though he had a horrible, HORRIBLE morning yesterday. Ooh wee, did he have a meltdown, and it is getting harder and harder to MOVE him during it. If he is in the basement, though, I like to move him to the carpet, because he really flops himself around and I'm scared of him hurting his head.

Friday I and the girls met Amy and Anthony at the park and it was ROUGH. I am not proud of my behavior, because I was very tense after a long-ass ride to the park, and then Anthony was mid-meltdown when I got there. I feel like I should be SMARTER and more ON TOP OF THINGS with regard to Anthony and I'm always so mad when I'm not. I think we should have been keeping the HOME in home therapy and we have been going out too much. I think it's overwhelming for Anthony. So anyways, I was mad and grumpy and even though I told Amy I was sorry, I want to say it publicly too - I was a big jerk and I shouldn't have been anything but nice to you, Amy, since you are nothing but nice to us. So. Anyways.

We are looking at houses and making bids and counter offers and I will be glad when this whole part of the process is done. It makes me sort of hate the people that we're dealing with and I don't even know them! But like - people are SUCH JERKS. When the people that bought our house made their offer, we counterered right away and then we just sort of kept it moving. We are supposed to hear by 6:00 tonight from this couple whose house we are trying to buy and they probably won't have an answer til this afternoon, and it will probably be no. So ... why make someone wait? Why make us waste a Sunday afternoon where we could go look at our second choice house? Just to be mean, is why. So I hate them. SO it's probably best that we move through this process as quickly as possible. Last night in church there was the Gospel about the Pharisee ,who goes to pray and says, basically, 'thank you, God, that I am so much better than the rest of humanity'. And I read it at first and I thought, 'do I know how that feels!', and then, of course, the point is that that actually DOESN'T make you better, to think that you are better than everyone else. So. I am a work in progress, and I would like to be away from situations where I judge others. Ha!