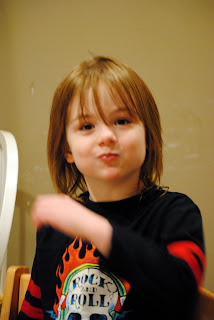 It occurs to me this week that Anthony never, ever talks at home anymore. He has gone like 11 days in a row without an accident at school, and allegedly he talks away there, but man. He hates it here, I guess, because he spends a lot of time pooping in his pants, or on the floor, or the furniture, or ... anywhere but in the toilet, mostly. He used to talk at home. He used to sing at home. He used to sign things, or say what sign I was making. But now he does nothing, except run around, tear cheese off of pizza and throw it on the floor, get the ice cream out of the freezer and dig it out with his hands, enjoy the bath, take off his pajamas, pee and poop all over his room, have tantrum after tantrum after tantrum, on and on and over and over. Today I thought - it's like he's an active member of his school - a 'learner', as they call them, but he is not a part of this family. Sometimes it feels like every nightmare I have about autism is coming true and he is getting further and further away from us.

THEN sometimes, he's very sweet, he comes over and leans in for a hug. He seems to enjoy the ball pit that I made him. He plays chase with Maria. But I have to be honest and say it's so, so rare. He is mostly on his own, stimming away, taking off his clothes and voiding everywhere. He is dropping food on the floor, and dragging his food covered hands all over the furniture, me, Mike.

I have all these friends from the internet who are autism moms. I feel, as usual, that I have nothing in common, that our days are so, so different. I am ground down to a nub every day and maybe that's why it feels so hopeless here lately with Anthony but man. I am really, REALLY hoping that we have some kind of a turnaround after the new year.

Hmmm. Good news. Well, he's been accident free at school, so that's good. He has a new program manager that has worked with him before and that I really like, so that's good. I cut his bangs. But now he AND Veronica are howling away so it's hard to think of anything else that's good. Maybe tomorrow.

Sorry that it's been so tough at home. Maybe Anthony's just more comfortable at with you and works out his frustrations there (or feels able to relax without the stress of having to talk). Hang in there.

I'm so sorry, Joanne! That is SO HARD! You are INCREDIBLE for getting up every morning to face another day!!!

Hmmm, I was thinking: do you know what the potty at school looks like? Or the bathroom he uses? I wonder if it would help if you could somehow make the two places similar...I don't know if it would be possible, but could you send some of your bathroom towels and/or an identical shower curtain to the school so they could hang those things up there, and then he would see the same things at home and make the connection? Or maybe a certain, distinctive picture you could hang in both places? Something...it just seems like there ought to be a way to connect the two places in his mind...could they play certain music when it is potty time at school that you could play at home when you take him to the potty, or does he just to go the potty when he needs to at school? (Which reminds me, have you seen the new Potty Time DVD from "Signing Time"?...which would only be helpful if he likes "Signing Time"...)

Anyway, just a few thoughts I had. (I will COMPLETELY understand if you JUST! CAN'T! DEAL! with ONE! MORE! THING!) NOT that I think that YOU don't have thoughts! But, if you're like me, your brain is a little fuzzy from the new-baby sleep deprivation at the moment!!

Just delete this if it's awful and know that I'm rooting for you and Anthony!!

SiS: I do think he doesn't want to WORK at home, and I respect that but it's hard when I just NOTICE one day, hey he never says anything here. And I try to work some of his programs here at home and he looks at me like, are you kidding, lady? He actually LAUGHS at me! I should want him to be relaxed at home, I just wish it didn't mean these tantrums. I feel like they break my heart. I shouldn't, though. It's just how he expresses frustration.

DMB: It's NOT awful and he LOVES Signing Time. I'm a jerk, that dvd was on sale not long ago, I should have gotten it then. But I'm going to get it today, it's worth a try. He really, really loves Signing Time, we all do. Thanks, you guys!