One Year Ago Today

Anthony is home from school today, which is SUCH a disappointment, since yesterday might have been one of the worst days we've had, ever? Maybe not ever. Maybe in a long time. It started at 5:00 with a tantrum that was - I don't know the words for them anymore. Horrible. Really bad. Exhausting. SOUL SUCKING. It makes me feel like a different person, to see him in such torment. It makes me mad at him and mad at me and mad at everyone and everything. Everything I was trying wasn't working so I left him with Mike and Mike took care of him until he felt better. But he was at a low-level of danger all day. Anything will set him off when he is like that and lucky (sarcasm) for us, we have Maria, who shouts BOO! every time she comes in a room, or screams or squeals or is in general tough to be around if you are in a bad mood. So. Rough day. And here we are, just WAITING for Monday, and now there is no school, for Anthony or Maria. Anthony doesn't really know or care, but Maria screamed and cried for a long time when we told her that she wasn't going to school today. Hoo boy.

Last night he was so, so tired, and he fell asleep early. Veronica has been having some trouble sleeping all night so we left her to figure it out on her own last night and she howled it up pretty good from 1:00 to .... sometime, we both fell asleep, but we were so worried she'd wake up Anthony. She didn't, though.

I met several of my neighbors yesterday, I went to a cookie exchange which was really fun. I met two other moms of kids with autism, and I learned that there are a few other families in the hood that have kids with autism. But I feel like we are always the autism-iest. One of the moms had a son who was 12, he was mainstreamed in school, he always talked, etc. The other mom's son was 30 and married. It always feels like I'm going to have something in common with people and then .. not so much, really.

I have to say, Anthony is doing great this morning. I am trying to set up some sensory fun activities for him and maybe it's helping, I don't know. Or maybe it's just luck or maybe he's well-rested or maybe he's about to blow! It's a mystery! When he's happy, he's so content and cute and perfect and then when he gets so upset, it's just - well, like I say, there aren't good words for it. But if there were words for it, I'd scream them at the top of my lungs, and pound the ground with my fists.

I haven't been posting much, but it's because these other kids of mine are SUCH a pain. I can't do anything without some jerkstore or other grabbing my damned hand and pulling it away. Veronica's climbing is epic. She is sitting on the table next to me right now and it's a race - will I finish typing first or will she fall to the ground? I'll tell you in the next installment, ha! 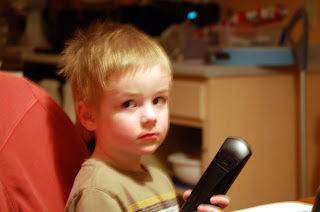 Oh man, you may think your kids are crazy...but they make for EXCELLENT blogging! And the "autimsiest"? LOL.