Ooh I love this picture. Doesn't Maria look dreamy, there in the back? It would be an excellent album cover, they both look very emo.

Anthony has had his first day at his public school. I spent a LOT of time on the phone with various jackasses about where he was going to go and who would take care of him, and I think we got it all straightened out. I'll tell you, though - there are a bunch of rotten people in public education, in my opinion. They do not give a HANG about the child or whether or not they are left behind.

I was talking to some friends this week about schools, public versus private, etc., and I said how we wanted our kids to go to Catholic school, but probably not Anthony, not for a while anyway. I said how it doesn't reallys seem too CHRISTIAN to me, that Anthony can't go to private Catholic school because he has autism, but there it is. He can't. Private schools are under no obligation to provide an education to kids with special needs. Kids with special needs have to go to public school, where they are legally bound to educate them. Although it doesn't really seem to me that our public school wants to educate Anthony. I mean, they DO, they kept telling me, if I would just ENROLL HIM FULL TIME, he could go to the autism classroom, but because I CHOSE to homeschool him (which is what they think of the ABA therapy school he goes to), all they could do was provide him a place at his border school.

I got there to pick him up on Thursday and his speech therapist told me it was her last day. It was also Anthony's FIRST day with her. Oy. 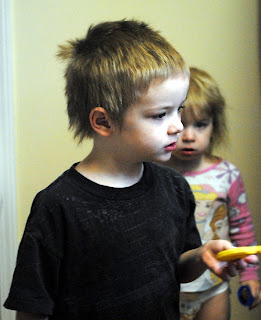 I think Anthony's first day went pretty well considering it was a whole new routine for him.
I kept him in the OT room for a few minutes and tried some of the standard activities from last year-sitting on the platform swing; standing on the inflated disc; sitting and bouncing on a ball. I tried to do some joint compression with him and some heavy touch pressure by rolling a large ball over his legs while he was laying down.
After a few minutes we walked down and he met the kindergarten teacher. I let him walk around in the class for a few minutes. He seemed pretty interested in everything. Then we walked to the speech office and he met Ms. Mindy and we stayed in her room for a couple minutes. We went back to the OT room and did a little more swinging and bouncing. I walked with him to Mrs. J's class and he sat at a table without any problem. The other children were very nice and helpful; giving him a coloring page, and a flilp book of the different colors. I helped him color his worksheet, he required hand-over-hand assist but he was helping to hold the crayon.
He finished coloring and we went over to the book bin where the children get books to look at while they sit on the carpeting. A boy from Anthony's preschool class came up and greeted Anthony. He wanted Anthony to sit next to him on the rug. It was time to sit down and Anthony sat down next to his friend and with the other kids.

So that's sweet, right? It made me cry, as I was reading it to Mike, about the other kids being nice and about his friend from preschool. His name is Sean and he's a year older than Anthony. I have high hopes, as usual.