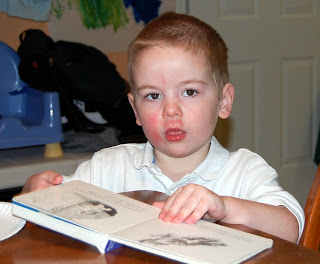 He is sick, as it turns out. His teacher called Mike today and told him that she had taken him to the nurse and the nurse said he had Fifth's Disease, which is also known as Slapped Cheek Disease and Parvo. The Parvo that he has is not the same thing that kills dogs, even though it's unnerving that they're named the same thing. Once they have the rash, it's not contagious anymore so he can still go to school tomorrow. I'm not entirely convinced he has it, the rash is supposed to spread so we'll see. He's been rubbing his face all over creation for the last four days so of course it's red. The nurse also said his ears were red, but that happens whenever he's hot or mad or just stirred up. Another complication of it is that if you're pregnant, you're not supposed to be around Parvo, so...that sucks! If you've had it, you're immune and I was at the OB today anyway and she did a test for it, but my Mom thinks I had it, so it should all be okay. What is probably worse for us all is that we are going to go insane here if he doesn't get better soon. Every day I think he'll be better and every day he's not. He had a great day at OT at school today and a great time at OT at the other place this afternoon but he fell asleep on the way home and then woke up and screamed, shrieked and groused for ... maybe 20 minutes? It seems really long when you're in it, it makes Maria yell and scream and we basically want to just leave them both here to duke it out. He woke up at 2:00 this morning and did not go back to sleep. How does someone do that? Mike and I have been up in the night for most of the night for the last ... four Mondays? I think? It's super unfortunate because I have to work on Tuesdays and I am dead tired by the time I have to go there. Thank God Mike is home this week or I would not make it. This has turned into sort of a complaint, sorry! That's all we have around here!

Hmmmm, now you've got me wondering if this is what Jackson has too....