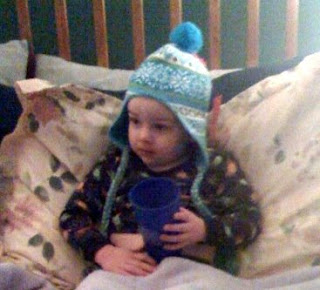 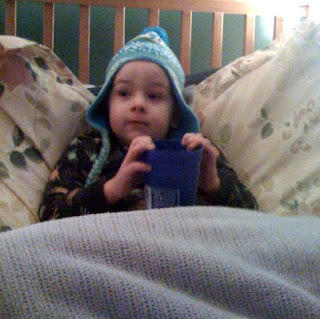 ...and we are resorting to hats for amusement. Anthony slept all night again, thank GOD. We were worried because he slept so much yesterday. We had kind of a hard time getting him in the bath, he seems confused about his schedule since he's sleeping so much. He *really* doesn't like to be off his schedule, as you can imagine. I'll tell you a secret - having autism and the flu is a PAIN! It's so hard to find out what's wrong and it's hard for us to tell him that, for example, the Tylenol is NOT going to kill him so he DOESN'T need to slap at us as we try to give it to him. I am going to try the chewables that my friend Julie recommended because UGH it is awful to try and give him the liquid in any form. I might see if Motrin comes in a chewable, because my friend Lacey suggested that maybe that would help get rid of this fever. ANYWAY. He took a bath and went to bed and woke up this morning about 6:30. His sister woke up at 5:16 TWO MORNINGS IN A ROW which is just creepy and she didn't wake him up so that was good. He is so funny - and smart - and confusing - I opened his door and he bounded out of bed and shuffled off to our room, which is what he normally does. He went into our bathroom, which had the light off, got a cup, turned on the water, and got a drink! This is confusing to me because how can he put all those steps together and still not be able to say HI or BYE? I don't understand him but I was impressed. I turned the water to cold and we had several drinks. Then we went downstairs and I held him for a while, he still felt pretty hot. He got up and started wandering around the kitchen and I had the brilliant idea to give him some fruit! Vitamin C! Yay! Except I can't imagine how much Vitamin C he retained considering two minutes after I gave it to him he threw it up all over himself, the floor, the dishwasher, the refrigerator they are coming to get at 8:45, just ... everywhere. This poor baby cannot win! Mike took him upstairs and changed him and laid him down in our bed and I went up and hung out with him and put my new hat from Laura on him and here he is. I am hoping and praying he's better tomorrow. I know I am being a big baby about it but it feels very trying and difficult. Maria is ... well, the way that she is, and we're tired and it's just so hard to find out what hurts and what can make him better. Anyway. Maybe tomorrow!