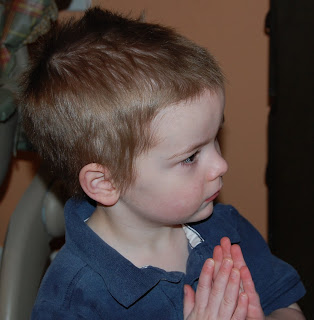 I almost called this Tuesday but it's Wednesday, isn't it? We have missed the last like four Mondays or something, of school and work, so I am confused as to what day it is. It looks like Anthony is saying his prayers or something but alas, he is clapping to a Wiggles video on YouTube. Ha. He is doing better, I'd say he's still not eating as much as he was but overall he's better. He's sleeping so well that I am not going to talk about it. :)