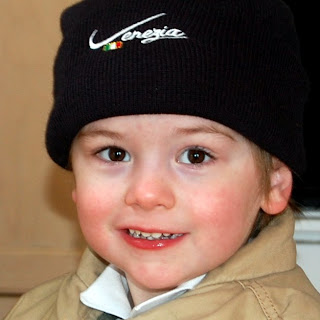 I don't know how he can look so cute and be so bad. We have decided to break up with his behavior therapist at the Children's Hospital here. I have no idea what he was meant to do but he seemed very clueless about children, children with autism, and Anthony. He was also constantly late and saw Anthony about every three or four weeks, which was just ending up to be pointless. It was covered under our insurance under psychiatric care so it didn't count against Anthony's therapies and we thought we should press on but it's completely ineffective and was just starting to seem like it was more trouble than it was worth so we quit.

I took Anthony to Occupational Therapy today, which we really really like, but we are going to quit that too. We go at 3:00 on Thursdays, which means I have to wake up Maria at 2:30 and run out the door. I try to get there as close to 3:00 as possible because Anthony can't stand to wait and usually runs in to the play room, which has a swing that he likes. But we always have to wait for at least a little while, and today, while I was trying to take off Maria's jacket, he flipped out and ran back there. Maria always runs back too and I am just at the point where I can't wrestle him out of there, while carrying her. I finally got him back to the waiting room by pulling his arm out of the socket and dragging him down the hall, while carrying Maria. Sometimes when I'm doing something like this, I think about the recommendation that I not carry anything heavier than 25 pounds and I just laugh and laugh. His therapist came out and she tried to calm him down, and I did too, but he poked me in the eye again and kicked me, and I told him that we could either stay and he could calm down or we could go home and he wouldn't calm down so we had to leave. SO I had to leave and shove them both in the car, I still hadn't changed Maria's damned diaper from when I woke her from her nap, so she was soaked, it was a HOT mess.

SO we're quitting. I'm taking him tomorrow to make up his appointment for today and that will be that. I HATE to quit, BELIEVE me, I hate to add to his time at home with me, with us trapped and nowhere to go and nothing to do, but I just don't have an option. We got up at 3:30 this morning with this fool, I am supposed to be TRYING to take care of this yet to be born baby, and Maria, and I just can't do it. I hope that something works out with this ABA thing and if not we will just shove him through the public school system and hope something works out, somehow. In the meantime, he is still super cute in pictures, although that is not really doing the trick for me anymore so much.

So sorry you are going to have to quit OT. Something has to give- right? I hope things are a little bit better. I too am not getting any sleep- if it makes you feel better. I am not trying to grow a person though- well I guess I am ;)