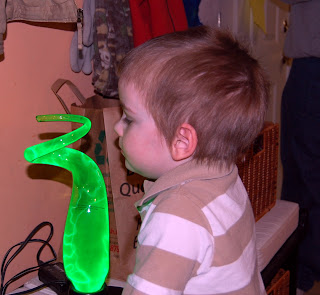 Anthony's OT suggested that I get some kind of toy for Anthony with some kind of fast movement action to it. She thought it might stop him from stimming so much. She has a top that you spin, you actually rub it on a table or something, and it makes these lights inside spin that Anthony really likes. So I've been looking and looking for something but it's harder to find than you'd think. Today Maria and I went to Trader Joe's for some stuff for dinner (and so that Maria could eat like a half a loaf of pretzel bread while we shopped) and I went to Spencer Gifts while I was up near there. I found this lamp that Anthony *really* seems to like but while we were on line, Maria was playing with this parrot keychain that had a tag on it's chest that said "PRESS ME" so I said to Maria, look at the bird, and I signed bird and then I pushed the button that said PRESS ME and you just know that damned parrot said "Squawk! Show me your tits!". Ha. I assured Maria she didn't have to. :)


ROFLMAO!! I am slowly reading your blog from start to finish. I love it and Anthony is unbelievably beautiful. Your whole family is, inside and out. I am glad you have this blog!!