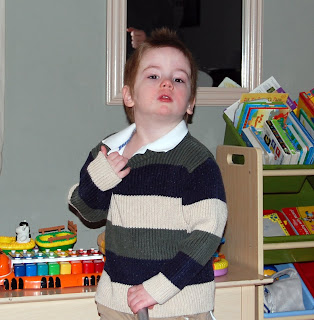 His collar was bugging him, but we got it straightened out before he left for school. He goes for a full week this week, thank God. We are also going to try to get the letter from his developmental pediatrician to the insurance company so we can get started on what we're going to do. I'm so worried that they're not going to cover *any* of the ABA therapy. I don't have any expectations, though, so at least they won't be dashed.
He is better today, you can see he's not as red. His cheeks get so red (this is to my Mom but anyone can read it) because he wipes his nose and whole face on his arm, my arm, my chest, my legs, Mike's body, the couch, etc., etc. He has very fair skin and it gets marked up so easily. I will never be able to beat him and keep it a secret! :) We put Vicks on his feet last night and plugged in his Vicks thing - it's like a nightlight that also emits Vicks. So maybe that helped? Maybe it was a one day thing? Maybe we are SICK OF WINTER AND IT CAN END ALREADY? On the weather this morning they said it's going to be a high of 31 today, 50 Thursday and then COLD again for the weekend. Wednesday is Ash Wednesday and the beginning of Lent so I hope Spring is coming.